BILLIE RADCLIFFE HAS A SECRET

And she isn’t sharing it with anyone, including Zach Montford. Even though she feels an instant connection with the good-looking banker and youth leader, she’s wary of rejection. Besides she’s only in the close-knit beach community until she meets the one man who can fill in the blanks about her history.

Zach hopes his temporary stint with the church will help him decide whether to go into full-time ministry. Though his career plans are uncertain, he’s sure about his growing feelings for Billie. When a shocking revelation throws everything into question, Zach and Billie have a chance to put the past to rest…and walk into the future together. 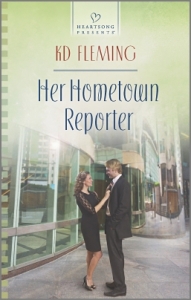 TOBY HENDRICKS HAS THE INSIDE SCOOP ON GINA LAWSON

The reporter is looking for a story that’ll be his ticket out of his small Georgia town. With her political connections, legal assistant Gina Lawson could help Toby realize his aspirations. Their friendship is just an added bonus, but falling in love isn’t part of his five-year plan.

Gina’s devoted to her family and community, and doesn’t plan to ever leave. Though she finds her favorite reporter maddeningly irresistible, she must guard her heart. But when a betrayal of trust threatens to shatter both their dreams, will Gina and Toby learn that they share the same values after all?

AMELIA COOPER HAS SWORN OFF LAWMEN FOR GOOD

Now any man who wants to claim the hand of the intrepid reporter had better have a safe job. Like attorney Evan Covington. Amelia is thrilled when the handsome lawyer comes courting. But when the town enlists him as a Texas Ranger, Amelia isn’t sure she can handle losing another man to the perils of keeping the peace.

Evan never expected his temporary appointment to sink his relationship with Amelia. Or to instantly plunge them headlong into danger. But when Amelia and his sister are both kidnapped, the newly minted lawman must rescue them—if he’s to have any chance at love.

The reluctant socialite feels more at home in the woods surrounding Tuxedo Park than at the vibrant parties hosted within. But when she stumbles upon the town archery instructor in her wooded sanctuary, he quickly makes her reconsider her life of solitude.

Accomplished archer Albert Taylor has vowed to make something more of his life than just catering to the Park elite. Falling in love with one of his students isn’t part of his plans. But when Albert’s accused of a crime, can this budding romance be over before it’s truly begun?